At Camp Bowie, an army training center in west-central Texas, fire covered a hillside with gray smoke. A Blackhawk helicopter hovered above another smoking hill, dumping water. An army captain estimated that about 30 people — civilian and military — were fighting the blaze, which scorched nearly 3,000 acres by the time it was put out this week.

Such scenes are increasingly common across Texas. An extremely dry winter combined with strong spring winds has caused a surge in the number of blazes. As of Tuesday, the Texas Forest Service, the lead agency for fighting wildfires, had responded to 618 that have burned 279,000 acres this year — far more than the 167 fires that burned 7,300 acres over the same stretch last year.

For the state’s Forest Service, the increased numbers come at a time of heightened scrutiny. For the first time in its 96 years, the agency, which operates out of Texas A&M University in College Station, is undergoing a thorough review mandated by the Legislature that is known as the “Sunset” process. A report by legislative staff recommended improvements to the agency — including increased oversight and better coordination across the state.

Budget cuts could slash nearly $34 million from the Forest Service’s budget over two fiscal years — a steep cut compared with the last biennial appropriation of $109 million. It will particularly impact grants the agency gives to rural volunteer fire departments to help purchase equipment, though these grants were criticized in the Sunset report as inefficiently dispensed. The cuts come after some successes. Paul F. Hannemann, head of the Forest Service’s Incident Response Department, said that in the last budget cycle, his department added 55 people, mostly firefighters. (The agency's overall expenditures also swell dramatically in bad fire seasons, when it must request additional funds from the Federal Emergency Management Agency and the state legislature.)

In February, the Forest Service also completed its move into a new statewide wildfire command center in Merkel, a struggling West Texas town of a few thousand people near Abilene. Each day, state and federal officials stationed there — including some from the federal Forest Service — huddle in front of large maps of Texas, coordinating responses to fires around the state. The Texas Forest Service rents the space from a local electrical cooperative for just $1,500 a month, Hannemann said.

When a fire breaks out in Texas, the first responders are the local fire departments, either volunteers in rural areas or paid professionals in cities. The Forest Service, which owns no planes and has just 81 bulldozers and 15 fire trucks, has 230 full-time firefighters on hand to supplement the locals. Nearly half of these, Hannemann said, also perform other functions for the agency, like combating invasive species.

Forest Service officials have been especially on edge this week, with temperatures soaring into the 80s and little rain in sight. Humans cause more than 90 percent of fires, according to Hannemann, whether by burning debris, arson or other causes.

One fire began a week ago at a gas drilling rig in an East Texas park; the wildfire is now out although as of Thursday gas was still being flared. According to the Sunset report, the Texas Forest Service has found that fires are “becoming more devastating with changing land use, drought, and increased population, especially where urban and rural areas meet.”

At Camp Bowie, the big blaze, which was caused by tracer bullets from machine gun fire, was one of four fires that began there last weekend, though the others were far smaller and were quickly contained, according to Capt. John Robinson, the camp’s range operations manager. Texas National Guard troops train there before they deploy abroad. 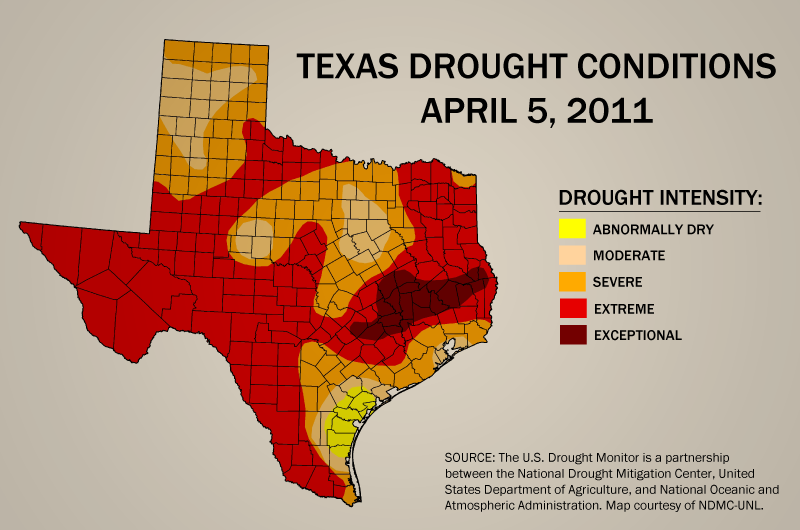 More big blazes are almost certainly on the way. John Nielsen-Gammon, a professor of atmospheric sciences at Texas A&M who also serves as the state climatologist, said that the federal Climate Prediction Center expects Texas to remain dry for at least another month or two. From October through March, he said, the state received less rainfall than in any other winter since 1966-67. However, he added, the current drought is, so far, not as devastating as those in 2005-06 and 2008-09.

As it leads the fight against wildfires, the Texas Forest Service has earned the respect of other groups. Andy Jones, director of the Texas office of the Conservation Fund, a nonprofit that partners with the Forest Service to get federal money for state conservation priorities, said he would like to see some changes to its non-fire-related policies.

Over all, however, the Forest Service is “an incredible organization that does an enormous amount of work that basically goes unrecognized,” Jones said. “They make a little go a long way.”