Sterling Shepherd sat at a metal picnic table dressed in an orange Harris County Jail-issued jumpsuit and described what got him into this situation — again.

“I’m extremely mentally ill and extremely intelligent,” said Shepherd, a 43-year-old with intense brown eyes and a big grin. During a recent 12-minute interview, Shepherd veered in and out of reality, talking at times lucidly about taking medication for his severe bipolar disorder and at other times describing how Vice President Joe Biden spoke to him through the television and explaining that Pope Benedict the XVI is his grandfather.

It was Shepherd’s eighth stay at Houston’s Harris County Jail, a facility the size of two football fields that houses more than 10,000 inmates. He is one of about 2,400 inmates in the facility taking psychotropic medications. The jail is the largest mental institution in the state. It has a special unit with 108 beds for the severely mentally ill, where guards wear less intimidating uniforms, nurses are on duty 24 hours a day and inmates undergo intensive psychiatric treatment.

“We’ve done everything we can do to make it therapeutic,” said Sgt. Bernard Kelly, a supervisor in the jail’s mental health unit. Some inmates say it’s the best mental health care available to them in Houston. It all costs the county about $27 million a year.

Harris County officials have seen the number of mentally ill inmates explode since 2003, the last time Texas had a budget crisis and made major cuts. Then, there were fewer than three full-time psychiatrists on duty at the jail. Now, there are more than 15. Often they see the same mentally ill inmates repeatedly.

As lawmakers consider even deeper cuts this year to deal with a budget shortfall estimated between $15 billion and $27 billion, jail officials across Texas are deeply concerned that proposed reductions in community-based mental health treatment will exacerbate the problem. Without resources in the community, more mentally ill Texans are likely to end up on the streets, in emergency rooms and behind bars, and it will cost local taxpayers even more to care for them.

“We can’t not respond,” said Dr. Michael Seale, executive director of health services at the Harris County Sheriff’s Office. “We can’t not put people in jail.” 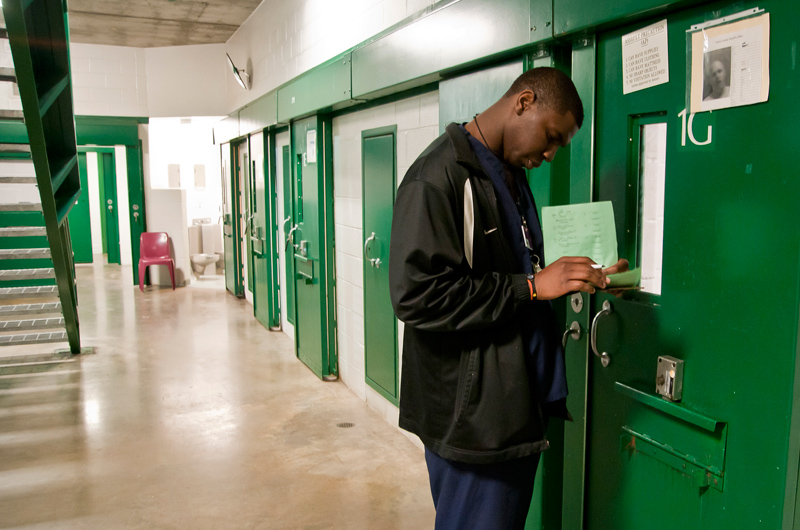 State lawmakers are considering budget proposals that would reduce community-based health care services for adults and children and for community mental hospitals by about $152 million in 2012 and 2013. It is about a 20 percent reduction in financing from the previous two-year budget. For community mental hospitals, financing would fall about 3 percent, but the money would be split among five facilities instead of three.

By 2006, Texas already ranked 50th among the states in per capita spending on mental health care, according to the Henry J. Kaiser Family Foundation. The strained budget allows the Harris County mental health agency to serve only about 25 percent of the adults in need and about 18 percent of the children, said Betsy Schwartz, president and chief executive of Mental Health America of Greater Houston.

Currently, there are about 2,000 people with schizophrenia, bipolar disorder and serious clinical depression on the agency’s waiting list. “We’re already talking about a system that was hemorrhaging,” she said. In Houston alone, the proposed cuts would mean up to 2,000 of the 8,500 adults who now receive community-based services would be turned away.

Cutting those services would take a devastating human toll, Schwartz said, but it would also come at an enormous financial cost. When people with untreated mental health problems fall into crisis, it is much more expensive to provide care in an emergency room, jail or crisis center.

The Harris County Neuropsychiatric Center saw a 45 percent increase in the number of crisis patients entering the center from 2008 to 2010, she said. Every time a patient walks into the center in crisis, it costs $800 to perform an initial exam, she said. By comparison, it costs about $12 a day for community-based mental health care services.

“It’s not like people are going to disappear and the needs are going to go away,” she said. “It may shift the burden from state dollars to county dollars.”

Although he disdains the idea of further cutting mental health funding, state Rep. Garnet Coleman, D-Houston, said lawmakers who are determined to close the budget gap without raising taxes have few other options when it comes to reducing health care expenditures. "Unfortunately for mental health, at this moment, there isn't an alternative," Coleman said.

Patty Wood knows that she would probably be back in jail without the community-based services that help her stay on medication, see her doctors and learn new life skills like typing — she’s up to 15 words per minute. “I’ve been incarcerated a lot, because it’s illegal to self-medicate,” said Wood, 48, who has bipolar and schizoaffective disorders.

She has been jailed for prostitution and drug and alcohol addiction. As of last week, though, Wood had been clean for about seven months with the help of mental health agency. “It helps me to function on everyday stuff,” she said. “Being part of society is not very comfortable and not something I’m used to.”

Wood said she is hopeful she can get a job and end the incarceration cycle. “I’m just a person trying to make it,” she said.

Shepherd, who landed back in jail on Super Bowl Sunday after he attacked a staff member at the Harris County Psychiatric Center, said he hoped that this stint behind bars would be his last. The jail psychiatrist, he said, is adamant that he takes his medication. And the jail staff said last week that Shepherd was more stable than before when they had seen him. If he can get help and keep taking his medications on the outside, Shepherd said he thinks he can stay stable. “I’m praying to the Lord Jesus Christ not to come back,” he said.

Jail officials and mental health providers are praying, too, that all the work they have done to help people like Shepherd and Wood is not undone by state lawmakers’ budget decisions. If community-based services aren’t around to help, said Kelly, who has worked in the Harris County Jail for more than a decade, he knows he will see them again.

“We let them out the door only to crash and burn,” he said. “We’re setting them up for disaster.”