The debate over how much federal health care reform will cost Texas put the state’s health and human services chief on the defensive on Wednesday, as he presented a budget estimate to lawmakers that is 20 times higher than federal projections and questioned the mathematics education of an influential U.S. House chairman.

HHSC Commissioner Tom Suehs estimates that health care reform’s top-dollar items — Medicaid expansion to roughly 2.1 million Texans, plus heightened reimbursement rates for primary care physicians — will cost the state more than $27 billion between 2014 and 2024, up $3 billion from his most recent estimate.

But the Congressional Budget Office’s numbers are far different. Between 2010 and 2019, the agency estimates, the reform will cost Texas $1.4 billion. A letter written last month by U.S. Rep. Henry Waxman, D-California, the chairman of the House Energy and Commerce Committee, notes that Texas’ estimate is more than the $20 billion the reform is expected to cost all state governments combined in the next decade.

“I don’t know where he went to school and got his math education. But it’s not right,” Suehs said of Waxman, speaking at a joint hearing of the Senate Health and Human Services and State Affairs committees. (The answer? UCLA.) “I can’t rationalize the CBO’s budget numbers when I know that I’ve got a higher population of uninsured than most states have total population.”

Some lawmakers said they’d understand a small cost differential, but that this difference looks enormous. “Glaring,” state Sen. Robert Duncan, R-Lubbock, called it. And they said that whatever the final cost is, it’s clear it will take a major bite out of Texas’ bottom line. 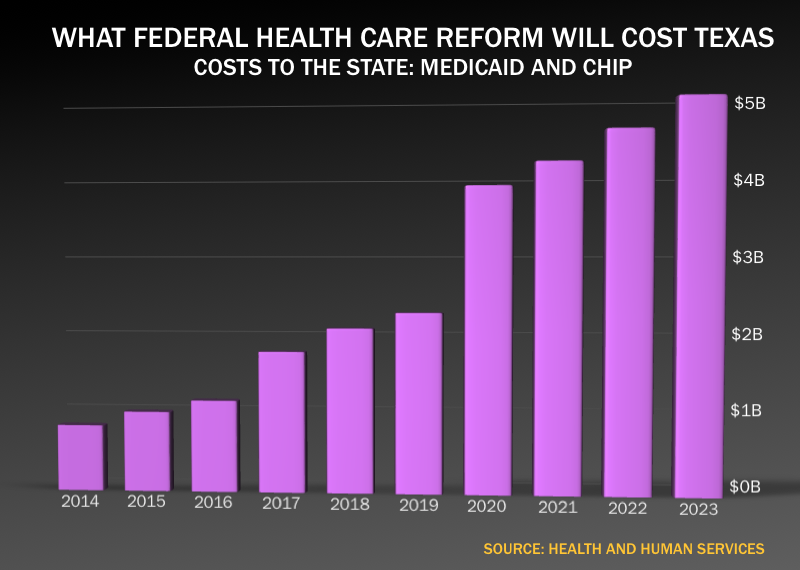 Suehs said the most obvious discrepancy between the state and federal numbers is that the federal estimate doesn’t include administrative costs. It also starts immediately, while the state estimate doesn’t begin until 2014. In the first three years of the reform program, the costs to the state are expected to be minimal, and Suehs said he wanted to give lawmakers a fleshed-out 10-year view.

“I felt I had an obligation to give a long-range [view] to the Legislature,” he said. “You need to have strategies for how you finance, how you fund it.”

But some Democratic lawmakers questioned that approach — particularly in light of staunch Republican opposition to the reform. “I don’t know of any time where I’ve had the financial years start out in 2014 and go out to 2023,” El Paso state Sen. Eliot Shapleigh said skeptically. “We’re being presented with a sticker-shock number.”

Suehs took issue with that, and he vowed that the federal estimate will continue to rise. “In my 35 years of doing budget work, there’s never been a group of cost estimates that have had more cost analysis than our efforts on this reform bill,” he said.

The state estimate is also far off of an analysis done by the nonprofit, nonpartisan Center for Public Policy Priorities, which estimated the federal reform would add up to 1 million adults to the state’s insurance roll and cost Texas nothing until 2017. At that point, Texas would start paying a 5 percent share of its Medicaid expansion — about $185 million. That share would grow to 7 percent, or about $259 million, in 2019, and top out at 10 percent, or $370 million, in 2020, according to last month’s analysis.

While it's true the federal government is footing almost the entire bill for health care reform for the first three years, Suehs told lawmakers on Wednesday that they will absolutely face unexpected costs to the state in that time period. But he said there could also be some welcome savings, particularly in programs lawmakers have established in the past that only apply to people without insurance. “There are trauma funds, appropriated tobacco receipts, county indigent health care programs … and those dynamics all change when individuals have insurance,” Suehs said.

And he said he sees great opportunity for Texas to lead the way with payment reform, by applying for grants to participate in federal pilot programs. “Texas wants to be in the forefront of payment system reform,” he said.