Throughout the primary campaign season, Gov. Rick Perry touted Texas’ relatively favorable economic and fiscal position vis-à-vis other states as a vindication of his policies and, more broadly, of Texas’ low tax, low regulation model of government. Perry likely will make Texas’ comparatively strong economic performance the centerpiece of his campaign against Bill White as well. The governor’s frequent references to Texas’ better-than-average economy and comparatively low per-capita deficit are not only meant to lend support to his own re-election campaign within Texas, but are also meant to promote the Texas model as an example for policymakers elsewhere. As he says in a recent New York Times article, “What I’m really interested in doing is continuing Texas on this path and letting it be a blueprint, a road map for other states to be successful.”

Perry is by no means the only person in politics who likes to compare Texas’ fiscal and economic circumstances to those of other large states. In the wake of the national recession and the enormous fiscal crises that states across the country (most notably, California) are facing, many of the country’s most prominent conservative journalists and pundits have seized upon the Texas-California comparison as evidence that the fiscal policy model practiced in Texas is superior to the high-spending, pro-union model practiced in the blue states. (For just a few examples of these commentaries, see here, here, and here; for some push-back from liberal columnists, see here and here).

What do Texans think about these matters? Do they agree with Perry and the conservative punditry that the Texas way is the better way? In the February 2010 University of Texas/Texas Tribune statewide poll, we asked 800 residents the following question:

How strongly do you agree or disagree with the following statement: Generally speaking, the way state government runs in Texas serves as a good model for other states to follow?

Overall results for this question are presented in this table (which, like those that follow, was produced by the The Texas Politics Project at UT). Gov. Perry’s campaign will surely be pleased to know that nearly twice as many Texans at least somewhat agree with the proposition that Texas state government is a good model as at least somewhat disagree. 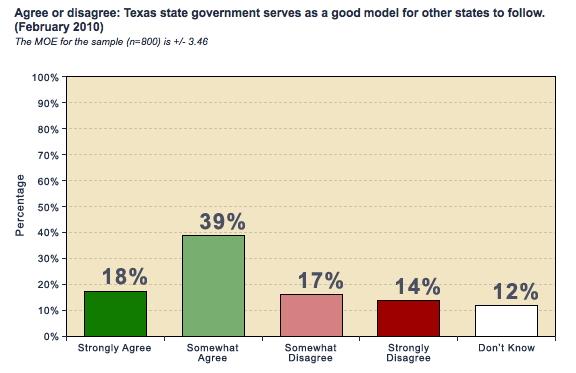 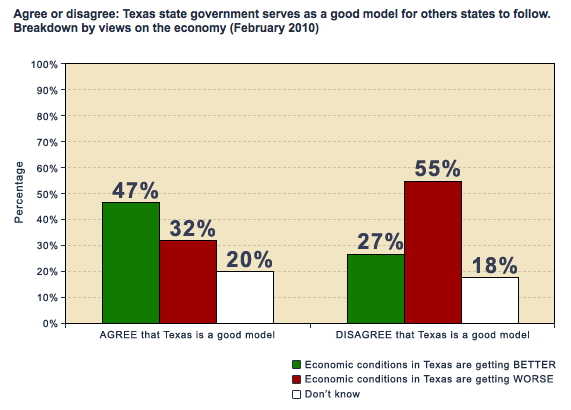 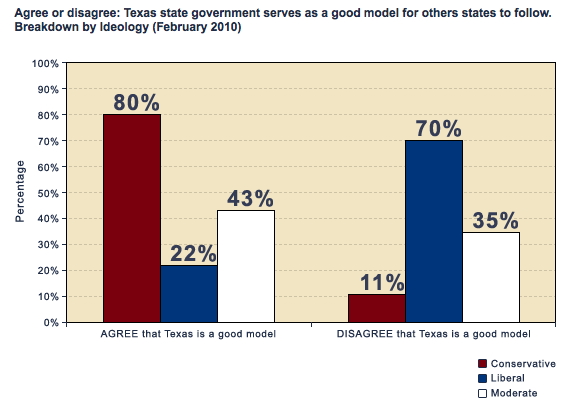 Given that Gov. Perry is likely to invoke the benefits of the Texas way in the general election, these results present a major obstacle for Bill White as his own campaign moves forward. The vast majority of Texans are self-described conservatives or moderates, and at this point, most of those Texans appear to accept Perry’s argument that Texas is doing better than other states at least in part because of the fiscal and economic policies that the state has adopted. Campaigning to dramatically overturn these policies would almost certainly not be a sound strategy for White. His range of options is therefore somewhat limited as he attempts to convince Texans that they should fire Perry and hire him instead.

Adam Myers has been research assistant for the UT-Austin Texas Statewide Poll since the summer of 2008. He is a graduate student in the Government Department at the University of Texas at Austin, and assisted in the analysis on this poll.