As promised, the race to replace state Rep. Brian McCall, R-Plano, is kicking into high gear — and it's not pretty.

Former Plano City Councilwoman Mabrie Jackson released a new mailer and a new website (http://www.planoresumefraud.com/) this morning accusing her opponents, businessmen Wayne Richard and Van Taylor, of failing to mention a few items on their resumes.  A spokesperson for the Jackson campaign said, "It's just a comparison of candidate resumes is all it is.  I don't think this qualifies as going negative." Let's take a look. 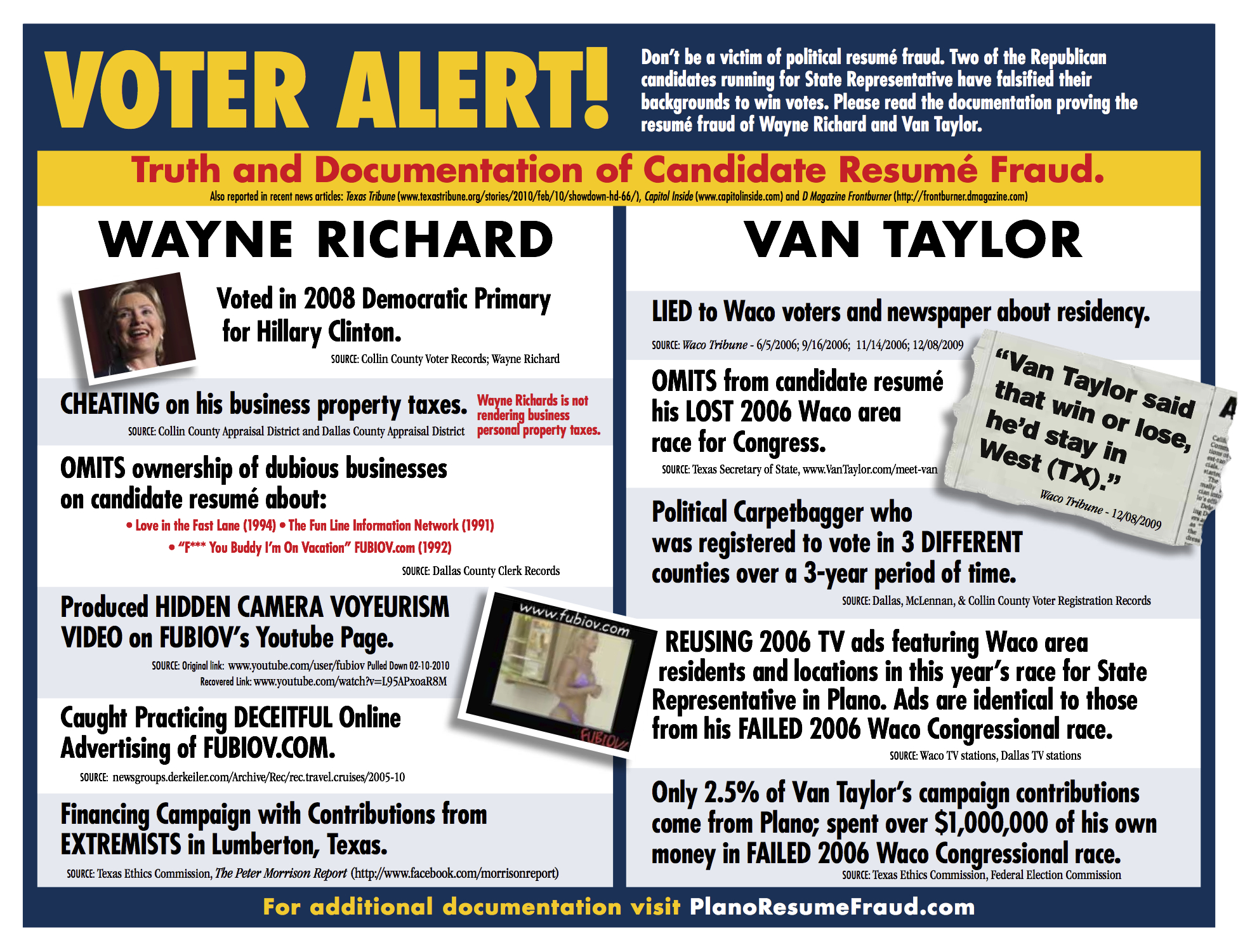 Richard is accused of, among other things, voting for Hillary Clinton in the 2008 primary, "cheating on his business property taxes," running "dubious" businesses (including travel website FUBIOV.com), and using the financial backing of extremists for his campaign.

Taylor gets hit for telling the Waco Tribune-Herald that he would stay in West whether or not he lost his 2006 bid for Congress — shortly before moving to Plano, reusing ads from his 2006 campaign in his current race, and being a "political carbet-bagger."

Richard's campaign has already issued a response.  "We have run an honest, ethical, grassroots campaign that is above board and without reproach," Richard says. "Unfortunately one of my opponents has decided to attack me both personally and professionally and I can no longer sit idly by and allow these attacks to remain unaddressed." He retorts that, among other things, he was a Rush Limbaugh-inspired CHAOS voter in 2008, that his business property taxes "have always been paid on time and in full," and that his supporters are "staunch conservatives who put their money where their mouth is." He has even re-launched FUBIOV.com for those that want to dig around — or share their vacation experiences.

There may not be much time left before the March 2 primary, but it looks like HD-66 will be making the most of it.

UPDATE: Taylor has also issued a response in which he characterizes the mailer as "the most negative mail pieces in Collin County history."  Far from trying to hide his 2006 run for U.S. Congress, his campaign says he "has repeatedly referred to the race in public forums."