In courthouse turf war, Texas counties rally against statewide court records portal
Texas counties are trying to kill an effort to allow public access to court records from all 254 counties through an online portal, and they've found friendly ears in the Legislature.

Should "made in Texas" mean 100 percent Texas grapes? Texas grape growers split on wine bill
A bill in the state Legislature would require that Texas-labeled wines be made from 100 percent Texas-grown grapes, rather than 75 percent under current law.

Advocates urge House panel to amend fetal remains bill by outlawing abortion
What started as a state House committee hearing on a bill that would require Texas hospitals to bury or cremate fetal remains turned into a heated debate over whether the proposal should be amended to abolish abortion completely.

Senate passes bill on inappropriate teacher-student relationships
Senate Bill 7 would punish school principals and superintendents who fail to report teachers with a history of inappropriate romantic or sexual relationships with students.

Texas poised to spend $2.5 billion on urban highway projects
As budget writers and lawmakers eye billions in voter-approved highway money for other matters, transportation officials are touting high-profile projects that will benefit from those funds.

Bill to bar death penalty for mentally ill faces uphill battle
State Rep. Toni Rose, D-Dallas, has filed long-shot House Bill 3080, which would prevent offenders proven to have had a severe mental illness at the time of their crime from being sentenced to death in a capital murder case.

Ted Cruz: New health care bill doomed in the Senate without changes
U.S. Sen. Ted Cruz said Wednesday that he has "significant concerns" about the new House health care plan, though he's optimistic those differences can be resolved.

The shale industry is scrambling to catch up to its own boom, Bloomberg

Meet the hundreds of officials Trump has quietly installed across the government, ProPublica

Trump, Cruz dine at White House, proving that while rivalry may be over, politics goes on, The Dallas Morning News ($)

As immigration rhetoric heats up, the number of families crossing the border in South Texas has slowed down, San Antonio Express-News

Bail bond reform bills introduced in Texas to help poor defendants get out of jail, The Houston Chronicle ($)

He's the only Texas Democrat to support the state's 'bathroom bill.' One vocal critic: His son, The Washington Post ($)

Join us online or in person for a conversation with Austin Mayor Steve Adler at the Austin Club this morning. 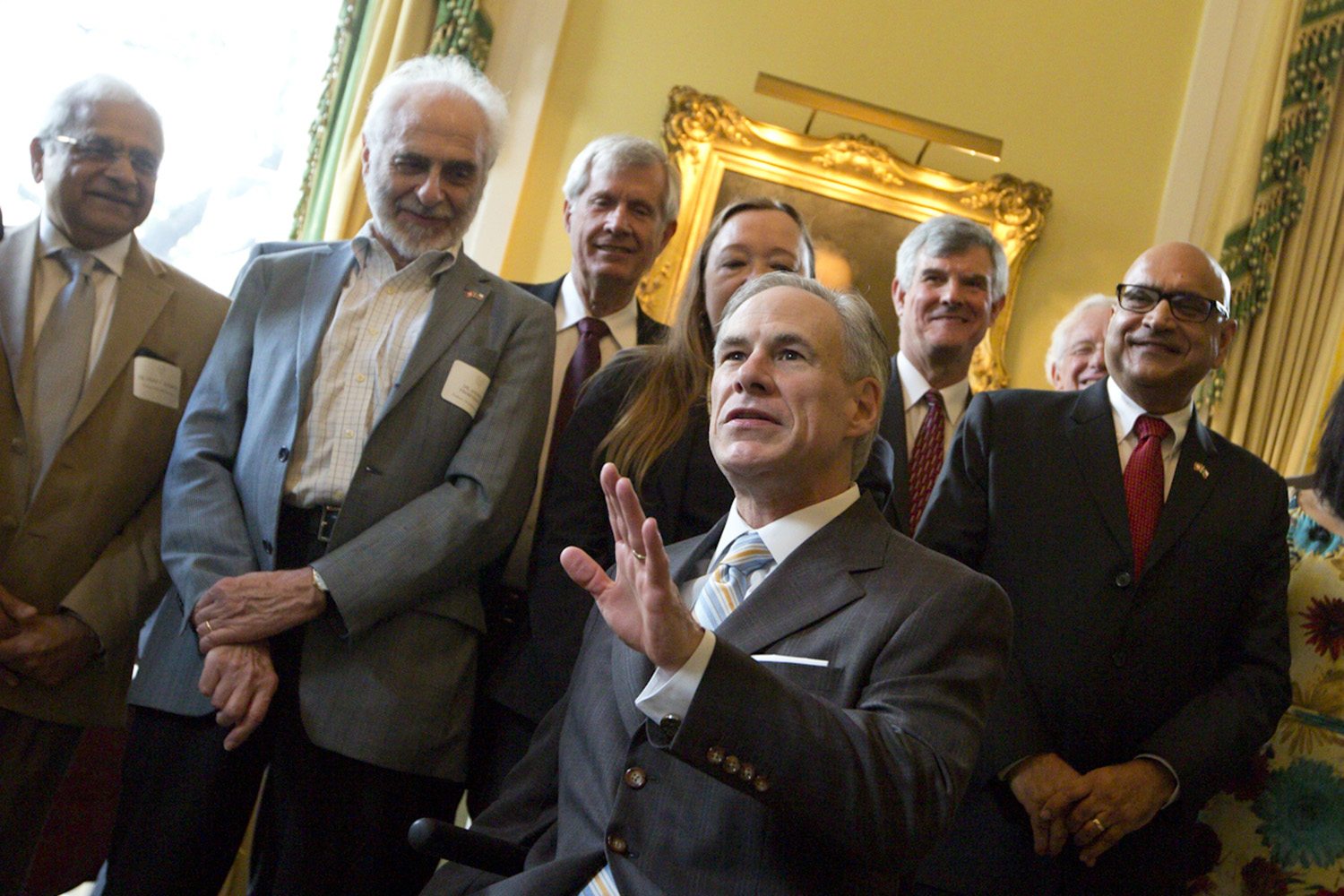 Gov. Greg Abbott discusses the Governor’s University Research Initiative grant program, a $40 million professor recruitment fund, at the Governor’s Mansion during a reception on Monday, March 6. It cost $9 million to attract renowned electrical engineering professor Tom Overbye, third from the right, to join Texas A&M University — but was it worth it? Photo by Marjorie Kamys. See more photos on our Instagram account.

"From traffic disputes to the U.S. Supreme Court, our judicial system will not work unless parties trust the independent neutrality of judges to enforce the law and thus accept decisions without resorting to unrest or violence, even when they disagree with the result."

— Craig Smith, Texas District Judge, and Tom Melsheimer, managing partner at Dallas, Winston & Strawn, about the importance of an independent judiciary via TribTalk