For this week’s nonscientific survey of insiders in government and politics, we asked about how the unofficial "start date" for the campaign season has changed.

Tradition has the political season kicking off after Labor Day although to this reporter, it seemed the candidate announcements started during session and picked up steam with sine die, the end of the legislative session. Nearly half the insiders also pegged sine die as when the political season began this year.

We followed with a question as to who benefits from an earlier start to primary campaigns. Two in five insiders gave the advantage to the challenger while 34 percent said the advantage accrues to the incumbent.

We then asked whether the number of contested GOP primaries would exceed the 58 contested races from a couple of years ago. On this, the insiders were evenly split. Forty-four percent said more, 44 percent said less.

We closed with an open-ended question in which we solicited thoughts on the impact of Donald Trump on Texas primary voters. Please note we didn't specify party ID on that one. We received several dozen answers, with many thought-provoking responses mixed in, the best of which we reprint below. 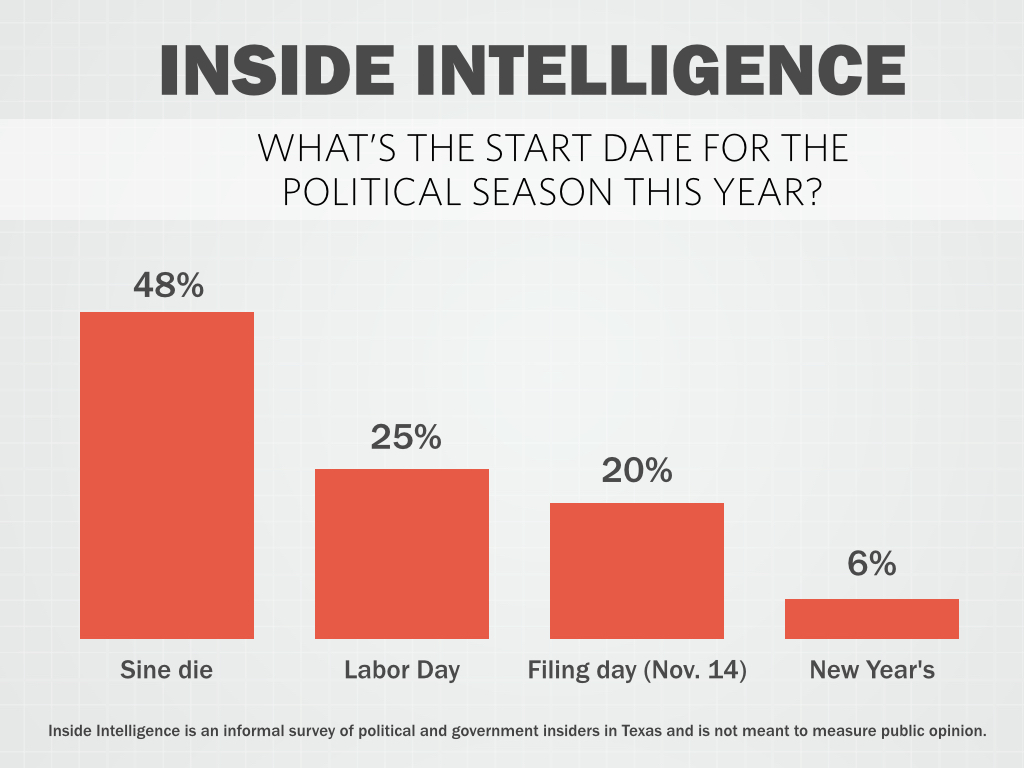 Tradition has the political season starting with the Labor Day holiday. What’s the start date this year?

• "To say there is a 'start date' implies there is also an end date. Anyone reading this knows our country, and Texas, have been in a state of permanent politics for *at least* 20 years."

• "Always Labor Day! Eat hamburgers with friends and start complaining that nobody competent is leading this country/state/county/city. It's a tradition."

• "It doesn't really end. Except for the political giving... campaigns are now permanent, year-round efforts in and out of session."

• "Although the presidential has been going for a while, all the campaigns kicked it up a notch this weekend!" 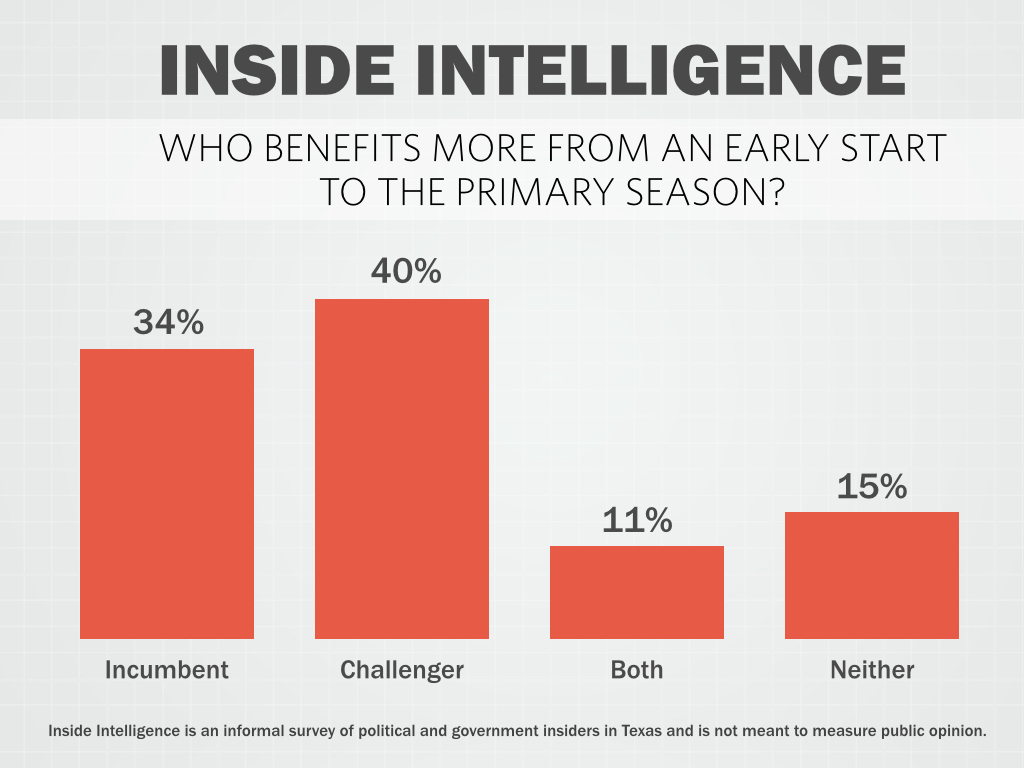 Who benefits more from an earlier start to the primary season?

• "Our entire system is built upon incumbent protection."

• "Nobody pays attention to anything until about a month out. So I don't think an earlier start helps anyone, except maybe with fundraising, but that's a mixed bag."

• "An incumbent will always have a competitive advantage regardless of when the primary season starts. However, independently WEALTHY challengers (i.e. Sen. Huffines, Sen. V. Taylor) pose big threats to those incumbents who have failed to actively run a year-round campaign."

• "The challenger gets an advantage by overcoming lower name ID — if he has the money to keep up for the longer term."

• "Short primary season reduces time for challengers to get attention and undermine incumbents." 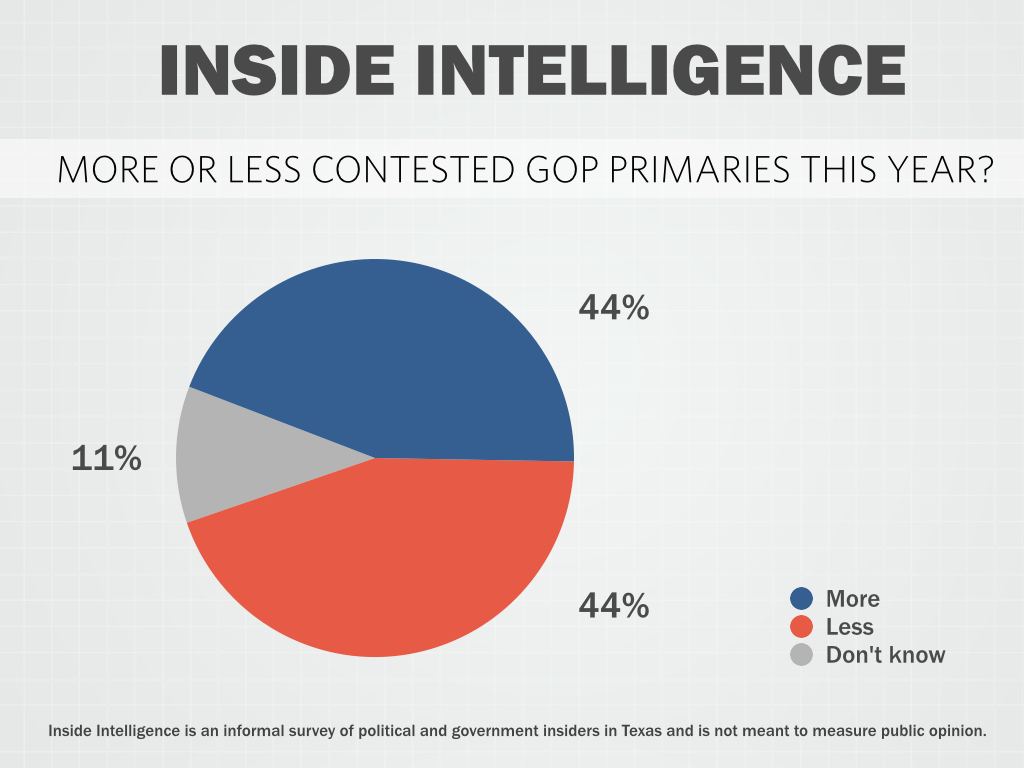 There were 58 contested legislative and statewide Republican primaries in 2014. Will there be more or less this year?

• "There are fewer statewide races but look for the same or more Republican legislative primaries."

• "But we should only count the 'real' races where there is some rough parity in funding or other factors that make it a true competition."

• "Too steep a climb for challengers, X factor is how many retirements."

• "Turns out the 'crazies' were not crazy enough so they will ALL be challenged now."

• "Motivated bigots do not bode well for establishment Republican candidates. Business is fiddling while Rome burns."

• "Right now, I think he solidifies the extreme right (the build-a-wall crowd) ... and likely drives up turnout. But ... who knows what that dude will say between now and March 1? He could also set a ground-speed record for implosion (which would be hard to do, given Gov. Perry's 2012 effort)"

• "Probably none... he will flame out and Cruz will be the beneficiary."

• "Not as much as he thinks... Texas Republicans pretty much stay with their original choices. I expect Trump will fizzle out some once a few states get to actually vote."

• "Trump encourages and, in a way, legitimizes the Tea Party portion of the debate and of the electorate. Ultimately the voters decide what is important and worthy. Trump may be ridiculed among the insiders, but consider Pappy O'Daniel: plenty of Texas leaders considered him a joke, even as the voters made him Governor and then U.S. Senator."

• "He has resonated with a base of Republicans nationwide, and I think that a lot of that 'base' is the Tea Party in Texas, so he might make a difference in the establishment getting another wake up call."

• "Trump has excited a segment of the GOP primary voting bloc to be sure and will doubtless run well in Texas. He might even secure a plurality but I am skeptical about that with Cruz and Bush there."

• "We'll see when the Primary rolls around but he should be able to knock at least 5 candidates out by the March."