A huge freshman class in the Legislature means there a large number of lawmakers have been set free — many of them to private-sector work around the Capitol, lobbying the people who used to be their colleagues. So we asked our insiders this week about how those transitions should work, and should be reported.

Keep in mind that many of the insiders are competing with the new battery of lobbyists and — as several of them pointed out in their own comments — they have a conflict of interest in answering the questions.

A strong majority — 71 percent — say there ought to be a cooling off period before an ex-officeholder can return as a lobbyist. Most suggested one or two years. And the insiders feel differently about legislative staffers, with 52 percent saying those workers ought to be able to drop their government jobs and go straight into the lobby; 44 percent said staffers should also have a revolving-door prohibition.

Legislators are currently allowed to use their leftover campaign funds to contribute to political campaigns, in effect giving them a fund to start up their lobby businesses. Not surprisingly, many of those already in the business think that should be curtailed.

The insiders overwhelming said lobbyists should be required to report the names of officeholders for whom they have done paid political work, and also any family relationships they have with legislators and other officeholders.

As always, we’ve attached a full set of verbatim responses to the survey; a sampling follows. 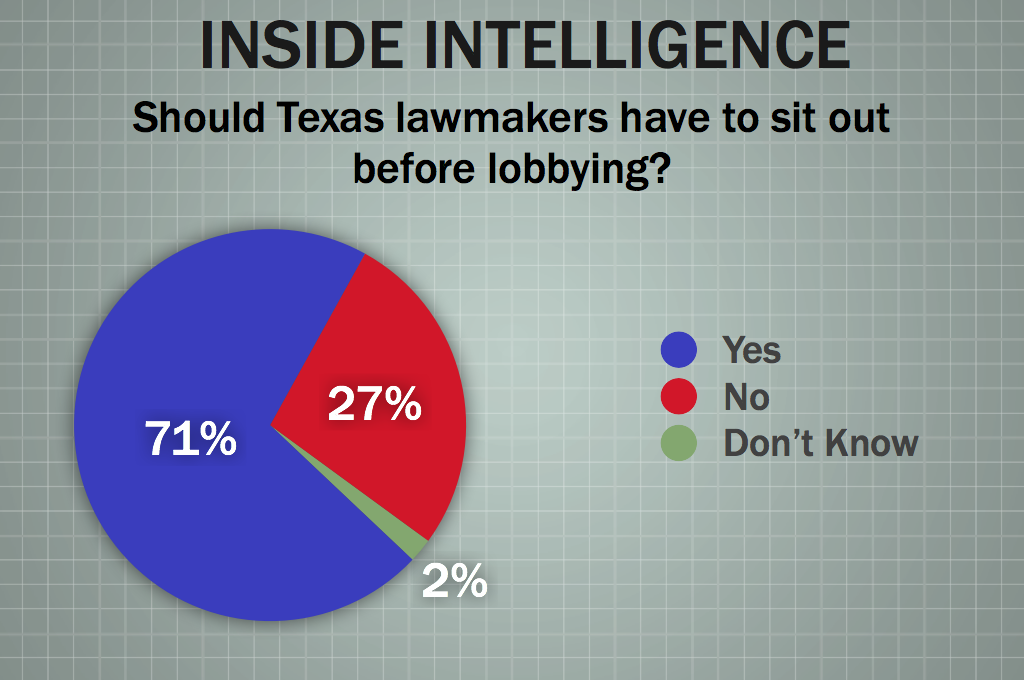 Should Texas officeholders be prohibited from lobbying legislators for some period of time after they leave office?

• "The whole point of 'lobbying' is to use one's contacts and business relationships to help a client get what he/she needs from the state government. Prohibiting a former officeholder from lobbying right after leaving office won't make it any less dishonest; all that does is put off the inevitable for a specific period of time."

• "A two-year hiatus would be reasonable. It would let some time and distance grow between current and former members and would require former members to get a real job rather than slip immediately into a set of lucrative lobbying contracts."

• "Needs to be 2 years. If it’s just a year, some kind of limbo status will be created with red-shirted ex-legislators waiting to get into the game. 2 years would reduce that."

• "Are you really asking a bunch of lobbyists this?:)"

• "Of course my answer is yes--I'm currently a lobbyist! Keep out the competition!"

• "How would they feed themselves?" 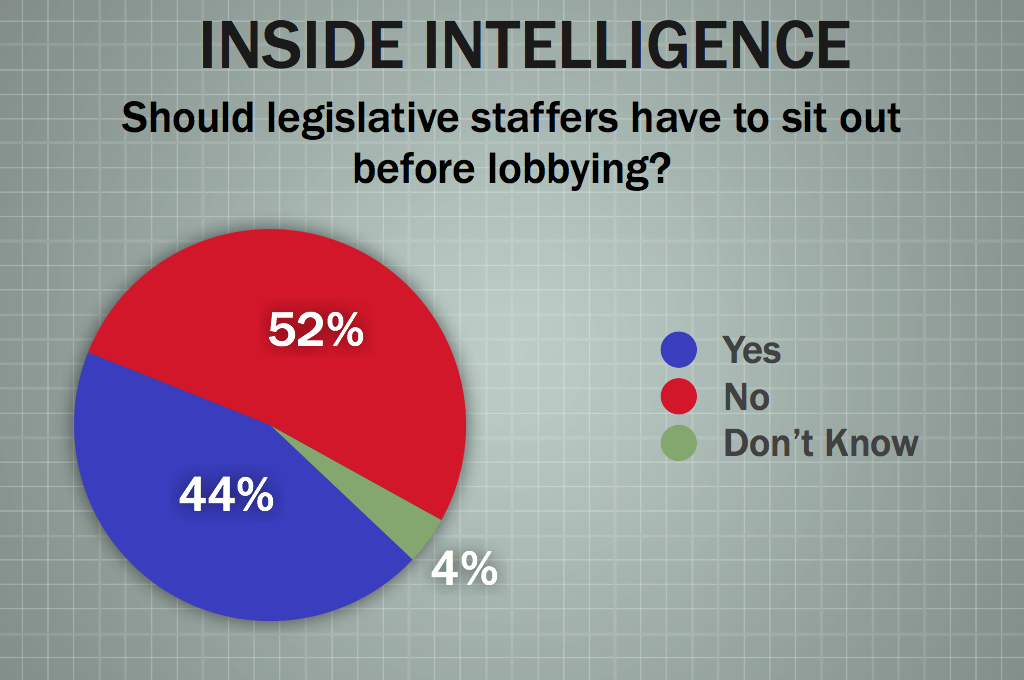 Should legislative staffers be prohibited from lobbying legislators for some period of time after they leave government employment?

• "They are already underpaid, so if you take that away from them, then how will you get quality people to run the legislature?"

• "Where would the high paid lobbyists come from...?"

• "This is what attracts many talented people to take low paying jobs in the Legislature."

• "What about agency staffers who truly develop mastery-level knowledge of various policy areas?"

• "I would say they could not lobby their former boss"

• "One year prohibition for Chief of Staff/Clerk level"

• "No one elected staff. They don’t vote on the floor of the legislature and they don’t represent a district. Their position is not constitutional. Staff has to feed their families and should not be prohibited from making a living as a lobbyist."

• "Should apply to all government employees..." 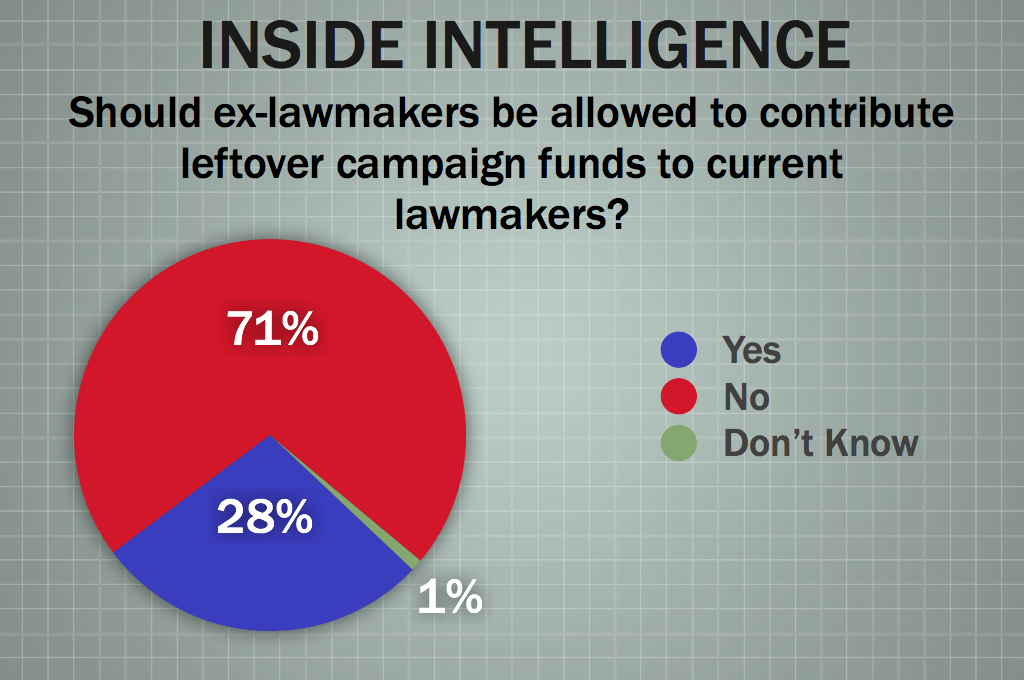 Should lawmakers who become lobbyists be allowed to contribute leftover balances from their political accounts to legislators?

• "Better there than to put it into their pockets."

• "Excess campaign funds should be returned to contributors, donated to their political party or donated to charity."

• "Seen that bad movie many times. Most real lobbyists don't like getting sandbagged and their $ helping a competitor or covering their overhead"

• "Absolutely not. To request campaign contributions for the express purpose of election/re-election and then use them to potentially advocate against the interests of the contributors is disingenuous at best."

• "This issue seems to be generating from some lobbyist who star is fading in an attempt to preserve their influence. Sort of pulling the latter up behind themselves. . In addition few of these members have that punt of money that would make any difference" 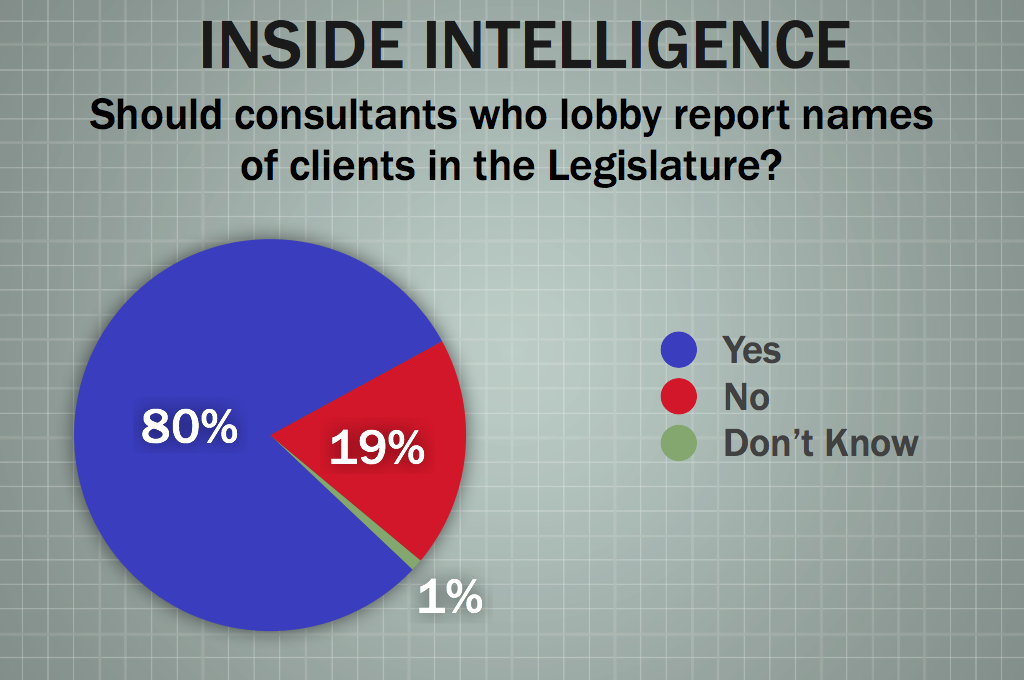 Should lobbyists be required to report the names of officeholders for whom they have done paid political consulting work?

• "It is already being done. All one has to do is to look at the campaign finance reports."

• "Transparency demands that business relationships between officeholders and lobbyists be disclosed."

• "Let the sun shine in, and so too should state staff be required to file names and amount of payments for political work."

• "Sure thing. This practice is much more palatable with full disclosure."

• "What a racket. Can't believe TX allows political campaign consultants to 'lobby' in their off season. They should follow the same rules as campaigns. Turn it off during session."

• "The names of lobbyists that work for political campaigns are already reported. Those reports are called campaign finance reports."

• "The disclosure is already there through the C&E report, so this really is a red herring. Why limit the reporting to just 'paid' political work by a lobbyist for a campaign? Any lobbyist worth their salt is out helping with the campaigns of those candidates/officeholders they support and who have helped their issues. That contribution of time and talent (strategy, intel, PAC fundraising, etc.) is currently not recording ANYWHERE, but it is significant. Further evidence can be found in lobbyist organizing Austin fundraisers for no cost and organizing neighborhood walks in near and far locations across Texas." 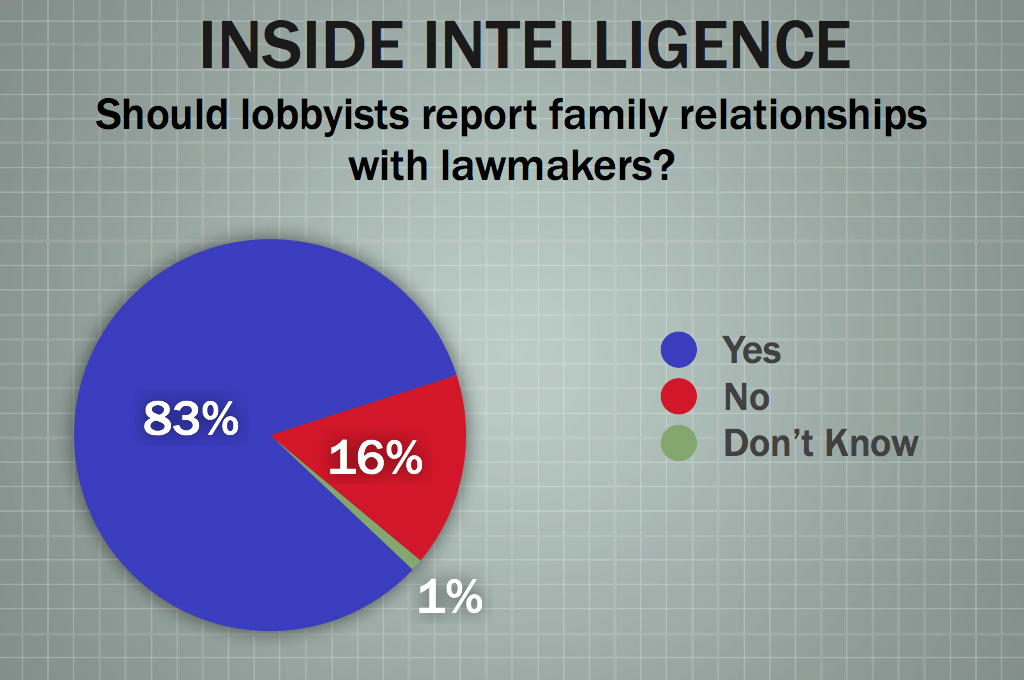 Should lobbyists be required to report any family relationships they have with legislators and other officeholders?

• "Uh. Pretty sure The Lobby et al. knows about familial ties. It's kinda hard to keep a secret in our world, especially one like that. But, if we're going to require disclosure for family ties, it should include staffers and all state employees, not just elected officials and appointees."

• "Transparency is key. Familial relationships with staff are just as important. Lobbyists with family members behind the scene are pretty common."

• "Lobbyist should be required to report relationships with legislators only within reason. At some point we are all related to Kevin Bacon."

• "This reporting should included lobbyist who are dating members of either the House or Senate. It should also be required of members who get their wives, husbands, girlfriends or boyfriends hired by the lobby. This is a particular area that has not been addressed by you or the rest of the press."