This week, we asked the insiders about the presidential race, about how the governor's record will play in a national race, about how Texas will get treated, and about what Texas issues will be a big deal if Rick Perry runs for president. On that last question, 70 percent picked education, 60 percent predicted the state budget will come up, 41 percent said immigration, and 28 percent chose criminal justice. Almost half — 44 percent — took the "other" route, with many of them mentioning the state's business climate and jobs. 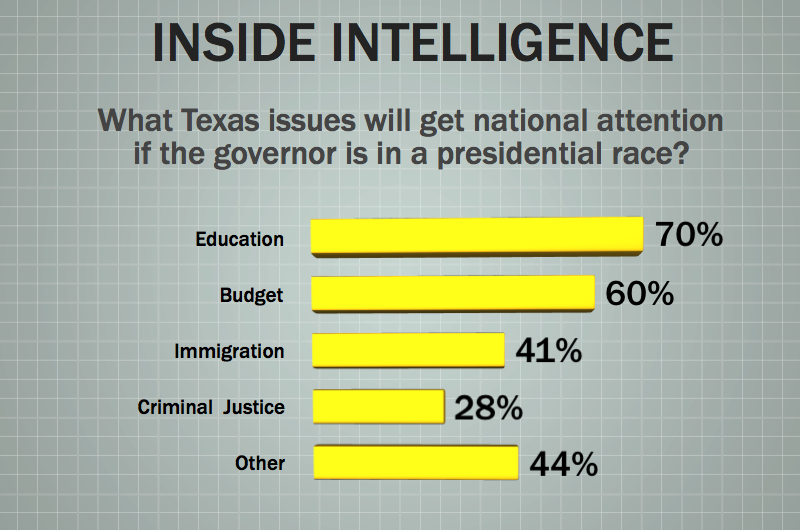 The full set of verbatim answers is attached, as always, but we've cherry-picked a few of the comments below.

What in the governor's record as a Texas officeholder will become fodder in a national race (positively or negatively)?

• "I think some of his right wing lurches in rhetoric will hurt him. Secession. The fact that he packs heat while jogging (or so he claims re coyote)..."

• "The record budget deficit which occurred during his watch as Governor. Also, the teenage pregnancy rate and school dropout will be negatives."

• "Nothing. The Teflon Man has weathered Gardasil and another ten missteps and has never stumbled."

• "Ties to lobbyists. Using stimulus money to balance budget. $10,000 a month house. All have to do with fiscal responsibility and all run counter to his TEA Party Crusader image."

• "The sources of his income and the extent of interconnections between his vetoes and personal investments."

• "The campaign will be dominated by Perry talking about the Texas economy and those opposed to him trying to tear down that story. In the end it will come down to silly things like people talking about his hair."

• "People care about jobs and the economy. Gov. Perry has had a laser like focus on jobs, jobs, jobs. It's worked."

• "Inappropriate influence of insiders with regard to the Enterprise Fund."

• "Not funding student enrollment growth even though there was money in the Rainy Day Fund."

What Texas issues or problems or recent history will get national attention if Gov. Rick Perry enters the presidential race?

• "The no-new-revenue budget and the Rainy Day Fund balance will be hotly debated, with varying interpretations of Texas' fiscal strength."

• "Two major budget deficits under his leadership, so how does he plan to clean it up in DC when he can't even do it in his own state."

• "His $10,000 a month rental house. We don't care, but nationally it will make people pause since he is suppose to be the fiscal savior."

• "Religiosity, ethics, and his awesomeness at killing varmints whilst jogging with armed guards"

• "Governor Perry would be very upset you left job creation off the list. Did you know Texas created more jobs over the past three years than the rest of the country combined?? Of course you do! He only mentions it every other minute. The cuts to an already underfunded education system will be the Democrats point of attack."

Will the national attention on Texas have any effect on campaigns for federal and local offices here?

• "Sucking out a whole lot of money that will be needed down ballot."

• "May force local candidates to take positions on national issues, either supporting or opposing whatever Perry is doing."

• "Unlike the last time this happened (Texan for Pres), it will not be a statewide bipartisan kumbayah, but just the opposite, which is a reflection of the national mood."

• "The next cycle will be nationalized no matter what Rick Perry does."